If not-nearly-as-fattening-as-it-tastes is a recommendation—this bread is bliss.  It's perfect for Mother's Day, even if you're both giver and recipient, because it's easy to create as well as luscious.  We concocted it alongside the "Grand Leddy Bannock" for Greyfriars Bobby, but since it's nearer a huge, and continentally chic sticky bun, rather than a Selkirk Bannock, we saved it for the site.

If the instructions below seem unclear, simply use the same process to create the pastry layers, that appear on page 17 of Greyfriars Bobby.  Since there's a much richer, non-spiced version served up in Brittany, we've named it for Bretagne—that bit of northwest France that pushes its coastline and cuisine towards Great Britain. 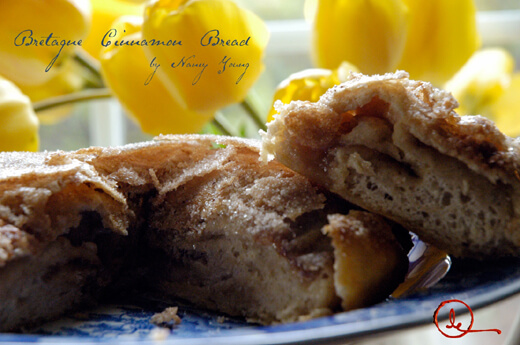 Preheat oven to 400 degrees, and butter or pan-spray a ceramic pie dish.

About 1 pound (14-16 ounces) of any preferred bread dough
1/4 cup butter, chilled and cut into pieces
1/2 cup cinnamon sugar (1/2 cup sugar mixed with 1/2-3/4 teaspoon cinnamon, according to taste)
A little egg wash
Roll out dough to ½-inch thickness, and dot evenly with about 2/3 of the the pieces of  chilled butter.  Sprinkle evenly with about he same proportion of cinnamon sugar.  Fold dough into thirds and dot top of fold with remaining chilled butter.  Sprinkle with all but 2 tablespoons of the remaining sugar.  Roll or fold into thirds again and pat into round loaf.  Brush with beaten egg.  Place loaf into prepared pan, and push dough out very gently towards the edges of the baking dish  Set aside to rise for about 30 minutes, or until dough is plump and puffed.  Brush with a little more egg wash and sprinkle with the reserved sugar.  Bake until bread tests clean—about 35 minutes.  Serve warm or cooled.
For more Mother's Day ideas, click on the thumbnails below: