"Probably the most exasperating thing about the Fashion is its elusiveness.  Even the word has a dozen definitions, and when it is pinned down and qualified, as "the Fashion in woman's dress," it becomes ridiculous and stilted and is gone again.

To catch at its skirts is the safest to say that it is a kind of miracle, a familiar phenomenon.  Why is it that a garment which is honestly attractive, in, say 1910 should be honestly ridiculous a few years later and honestly charming again a few years later still is one of those things which are not satisfactorily to be explained and therefore are jolly and exciting and in addition to the perennial interest of life."

~From The Fashion in Shrouds by Margery Allingham 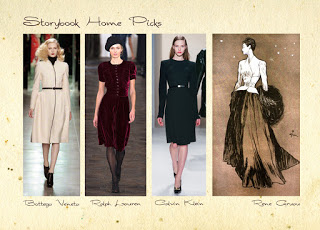 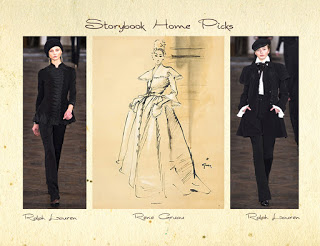 Despite all kinds of delays--including a remodel--Vol. 13 No. 2 - The Painted Garden (Movie Shoes) finally shipped Monday.  If yours hasn't arrived yet—it shouldn't be long until it does—and we've already received some lovely comments from some of you—many thanks!

Noel Streatfeild's fervor for beautiful clothes is even greater than Margery Allingham's, and rather catching.  Although there wasn't space to include much in the way of the  fashions of  the time in which the novel is set (late 1940s) inside The Storybook Home Journal, we had a great deal of fun just looking about for the kind of smart frocks and chic "dashing American clothes" she described within its pages--ranging from Aunt Cora's "fancy dress [that seemed] to Rachel as if it belonged to the first act of Giselle, for it had puffed sleeves and a peasanty look" to Jane's new dress (bestowed on her to enable suitable show-off-shining at her aunt's cocktail parties) made from "yellow musliny stuff, with little frills at the shoulders instead of sleeves, and, to go with it, very short socks and yellow shoes."

As we searched we were particularly impressed with the elegant renderings of postwar designs made for various design houses by Rene Gruau—so we've include a few of our favorites here.

We were equally excited to see that some of the fall/winter-wear from Milan Week 2013 bore something of the chic from the glory days of the postwar era.  (We even heard rumors of the return of the demurely endearing Peter Pan collar.)  Images from the recent Milan Week can be seen in full at Team Peter Steiger and Vogue.  (Be prepared, however, as you browse Milan Week, to see re-creations of alien nightmares in Whoville, as well as all of the usual preponderance of you've-got-to-be-kidding-me catwalk designs—but there are quite a number of real jewels, like these, among them.)