COVID-19 info for July 2022: We're still open online! We now accept PayPal, all major credit cards and Venmo (via PayPal). We've permanently discontinued in-store pickups; we now offer free expedited shipping for all art prints and free freight shipping on oil paintings. International ordering has changed significantly, and we suggest that you contact us to make special arrangements for orders shipping outside the United States. Most domestic orders are fulfilled on schedule by our manufacturing and shipping partners.

For the first time ever the spring issue of the journal didn't make it out before Easter.  We blame the demise of two computers and their attendant files for the delay--luckily Tanner, our resident computer whiz, saved the work, but a new computer and reconfiguration ate up too many of the days of March.  (Of course, the issue will still be appearing in mailboxes soon!)

By way of a modest apology, we're sending out a couple of easy, but scrumptious Eastertide baking ideas--Brioche a Tweets and Almond Bouchons as well as our wishes for a lovely and memorable Easter Sunday. 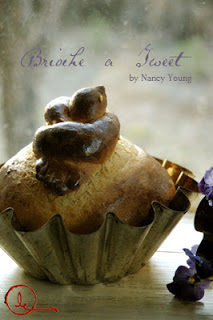 Any good brioche dough or just about any sweet dough can make this take-off on classic Brioche a Tete.  (We used the Whole Wheat Weekend Brioche recipe given previously in the Newsroom.)  We've featured bird rolls in The Journal before--they're just a bow-knot roll with the the ends left untucked--one end forming a head and the other a tail, which takes a little extra plumping and pulling (see Vol 7 No 4 - A Limberlost Summer).

For Easter and springtime, we thought we'd use the rolls to replace the traditional top to a Brioche a Tete.  Al christened them Brioche a Tweets (no relation, however, to social media.)  When scaling the dough for the brioches, use about 2 to 4 ounces of dough to make the "tweet" and about 12 to 16 ounces of dough to form the rest of the brioche, then simply nest the fledglings down into the bread.

After forming the breads allow them to double as usual, brush with egg wash and bake until golden. 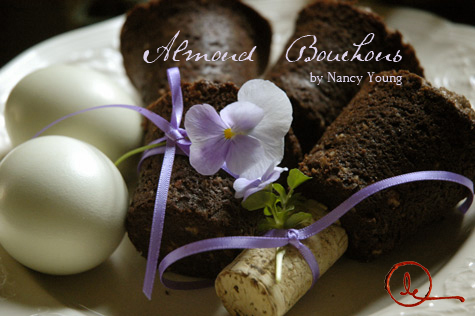 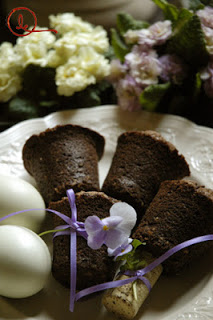 This is the high-calorie version of the "Chocolate Box Popovers" featured in Vol 13 No 2 - The Painted Garden (Movie Shoes) issue of The Journal.  Bouchon is French for "cork," and there are not only Bouchon recipes floating out in cyberspace, but Williams-Sonoma sells a mold exclusively for creating these little pieces of paradise.  This recipe is strictly ours, however, and we like it for Easter because it's very quick to create (you can whip up and bake a batch in less time than it takes the wee ones to color the first dozen eggs) and has more chocolate per inch than any bunny.  It's full of moist chocolate-on-chocolate richness--so it's much more than just handsome and hollow.  (And Tanner informs us that they make the wonderful ice cream accompaniments) Feed it to anyone with taste and let everyone else eat the Peeps.

Since we haven't yet splurged on a Bouchon Mold, we make ours in popover molds; but timbale molds, ramekins or muffins tins work as well.  The important thing is the chocolate.  And the butter and the almonds and the chocolate.... 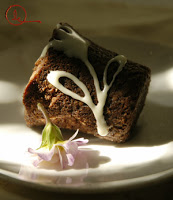 Preheat the oven to 400 degrees and use baking spray to prepare a bouchon mold, popover or muffin tin, or twelve timbale molds.  (This recipe can make anywhere from twelve to twenty-four bouchons, based on the baking mold(s) used.  If using a popover tin for example, as we do, make about eighteen bouchons by filling the tins half full, if you want them to have a flatter top and feel more like a cork.  If you don't mind a more popover or cupcake look, make a dozen instead--obviously we don't mind.)

Place the butter, sugar and salt in the bowl of a heavy duty mixer and, using the paddle attachment, beat together well.  Add the cocoa and flavoring(s) and beat for an additional minute, and then scrape down the bowl and continue beating for another minute or two.  Add the eggs one at a time, beating for thirty seconds after each addition, and then beat the mixture until it's very light.  Stir in the almonds and flour very briefly, and then fold in the chocolate chips.  Spoon into the prepared molds--half full for flat topped "corks" or almost full for popover-like bouchons.

Place in preheated oven and bake for 10 to 12 minutes for smaller bouchons, or 12 to 15 minutes for large ones.  The baked bouchons should stay moist in the center.  (They bake quickly, so don't get too involved with Easter egg dyes during the baking process.)