By Al R. Young
Just like the willful professors in competing courses during any given semester, painting projects don't always stay in line or behave well if they do.  And sometimes an artist's ability to respond to conflicting demands depends not so much on stamina, speed, or skill as on whether studio space or the way the studio is organized can respond.

The bedpost easel--so named because the horizontal bar at its center was originally a bedpost)--grew out of the need to use the $10 easel to work simultaneously on two paintings.  This recurring circumstance sometimes involves paintings of very different sizes.  The following photograph shows such an arrangement.  Of course, masking the under painting may be necessary, but that is easily achieved by placing a panel behind the outer painting. 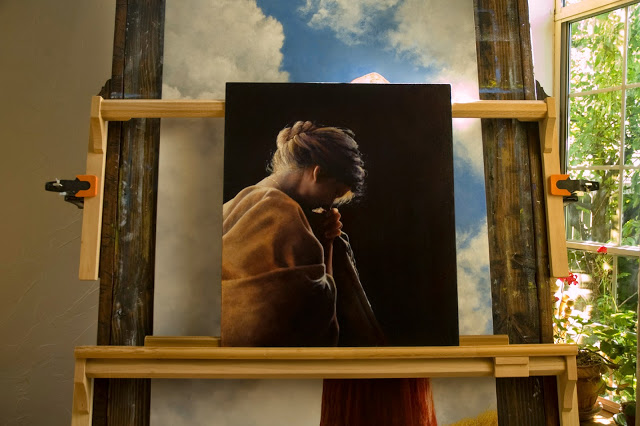 The following photo shows detail from the side, such as clearance, support and joinery for the joints in the frame, the ledge against which the base of the foreground painting rests, and the manner in which the easel clamps to the sides of the $10 easel.  The ledge (or tray) on which the smaller panel rests is a used section of balustrade base rail.