By Al R. Young
When I embarked on oil painting, I spent a lot of time mixing the colors of the rudimentary palette with which a mentor suggested I begin.  And because of ideas that correlate color with wheels, I arranged the colors and my experiments accordingly, as I methodically mixed colors in the abstract and also created tonal scales.

If I used a lot of a particular hue in a particular mixture my record of the formula consisted of a big dot for the part the hue played in the mixture.  Addition of a little bit of a hue was represented by a little dot.  And because I was experimenting with concentric rings or generations of mixtures, there developed a kind of pedigree reaching out from the ring of hues on the palette, and consisting of paths to be followed in achieving various results.

While the benefits of such exercise is now part of deeply buried substrata, the artifact of the color dots remains at the surface as a personal shorthand for keeping track of how I arrived at a particular hue in connection with a particular painting.  Living with how I think has taught me something about what I remember and what I don't, what interests me and holds my attention--even for many years--and what does not.  And, for whatever reason, color is something I seem to see new every day, as opposed to looking at it through a lens or superstructure of formulae.

I have also learned that painting projects can sometimes last for years and that very few of the really major and potentially catastrophic interruptions in the course of creating a painting are likely to be either planned or brief.  In view of this, I still use the color dots to record key hues in a work.  From time to time, particularly in the midst of pressing deadlines, I sometimes photograph the palette before cleaning it up at session's end, and even label the image.

After all, one of the best ways to remember something is to plan on forgetting it; not to try to forget, but to be prepared just in case.  In an era so fixated on memory, it is important to keep in mind that activities like focusing, concentrating, meditating, contemplating, pondering, and even remembering involve--indeed, require--a most judicious forgetting.

The following image features one of the formula panels I keep ready to hand in the studio for recording key formulas.  As soon as a formula is recorded on the panel, I make a digital copy of it, label it, store the file in a project folder, and add it to the project journal.  Unlike the interconnectedness of the formulas I created in the abstract, these formulas have no relationship to each other.  They simply accumulate on the panel, one after another.

Finally, the following image presents the kind of labeled record of the formula and its use, in this case a color applied as a dry-brush glaze on the sunlit slopes of a distant mountain. 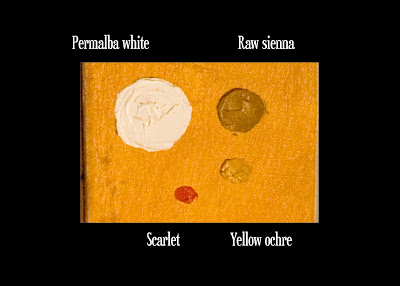 Among other things, the creation of paintings produces a great deal of panel scraps.  We gesso and keep on hand a supply of panels that can be used for notes like this as well as plein air sessions.