Many of these trees were my friends!

By Al R. Young
Trailhead was painted by the artist in the studios at Ben Haven.

Based on regular entries in the project journal for this painting, creation of the artwork involved approximately 147 painting sessions (from composition and panel preparation to completion of brushwork).

costumes, miniatures, and props created for this project
None.

methodology
This section presents only one or two items that may be of interest to professional artists, amateurs, and others interested in the work of the Studios.

While the remainder of this page talks about the genesis of this particular painting and some of the problems encountered enroute to its completion, the following articles also comment on this painting:

from the project history
From the time the children were very young, Saturdays often found us hiking in the mountains.  One of our favorite places—to which we returned repeatedly even after the children were grown—was the Nebo Trailhead at 9,100 ft. (elevation) in the Wasatch Mountains of north central Utah.  Sometimes we hiked along the trails.  Sometimes we could spare only a moment to walk just far enough under the eave of the forest to feel its welcome and renew our friendship with trees who remembered when the mountains were planted.

In my experience, very few paintings announce themselves to an artist as far in advance as Trailhead did to me.  I remember wanting to paint these particular trees when I saw them the day I took the photograph (in 2003) that eventually became my referent image for the project.  Even so, the keen the desire I then had to express the way I felt about this particular subject was already as old as a boyhood camping trip to Canada's Banff and Jasper National Parks in 1965.  And yet not even that span of years tells the whole story because even though I was born in the desert southwest, I was also born with mountains and forests in my soul.  Thus, no discussion about taking on, and then enduring a demanding and lengthy painting project like Trailhead can begin without acknowledging that there are things—powerful things—that draw us into such unknowns, inspire us to move forward, and then sustain us on journeys, the duration and difficulty of which, we never dreamed we could or ever would endure.  I do not say this because I think that either the painting or my part in it is monumental, groundbreaking, or significant in any way or to anyone but me.  Nor do I imagine that any of the insights or feelings I have gained in connection with this project are unique.  I just know, as Arnold Friberg once wrote: A picture comes tapping on my shoulder, saying, "Here I am.  Spiritually I already exist.  Now it is time that I shall come into reality, and from among the world's artists you have been selected to deliver me into mortal existence.  You cannot escape.  I will give you no peace by day or by night until you have fulfilled your duty." ("The Prayer at Valley Forge" by Arnold Friberg, Ensign Magazine, vol. 3 no. 2 (February 1973), center fold tip-in.)


The courage to commence

The gap, in the foregoing list of milestones (above) between 2003 and 2012, was occasioned by many things, not the least of which was my apprehension about tackling the subject.  When a patron shows up with a commission, one's readiness may need to be expedited, but this painting was not commissioned.  I was at my leisure to decide when I felt ready to embark, and thus I added reticence to other factors that inevitably dictate studio timelines.  Even so, I never lost sight of this particular subject and my keen desire to express how I felt about it.  During that waiting, I was greatly encouraged by the artistry of Ivan Shishkin.
Inasmuch as I spend a significant percentage of my time writing and attending to the operation of the Studios and other endeavors, I spend a lot of time working at a computer.  Accordingly, I often select desktop images that correlate with my painting projects.  This use of a computer desktop (particularly the slideshow option for background customization in Windows) provides a convenient way to always be "working" on my paintings even when I'm not working on them.  It's analogous to passively listening to a language one is learning or renewing.  In addition to circling through photographs of subject material, for the purpose of steeping myself in the structure of the subject and the play of light upon it, I find it helpful to circle through images of exemplary ways in which the subject has been rendered.  In terms of Trailhead, the following selections from the masterful work of Ivan Shishkin are the finest examples I can imagine. 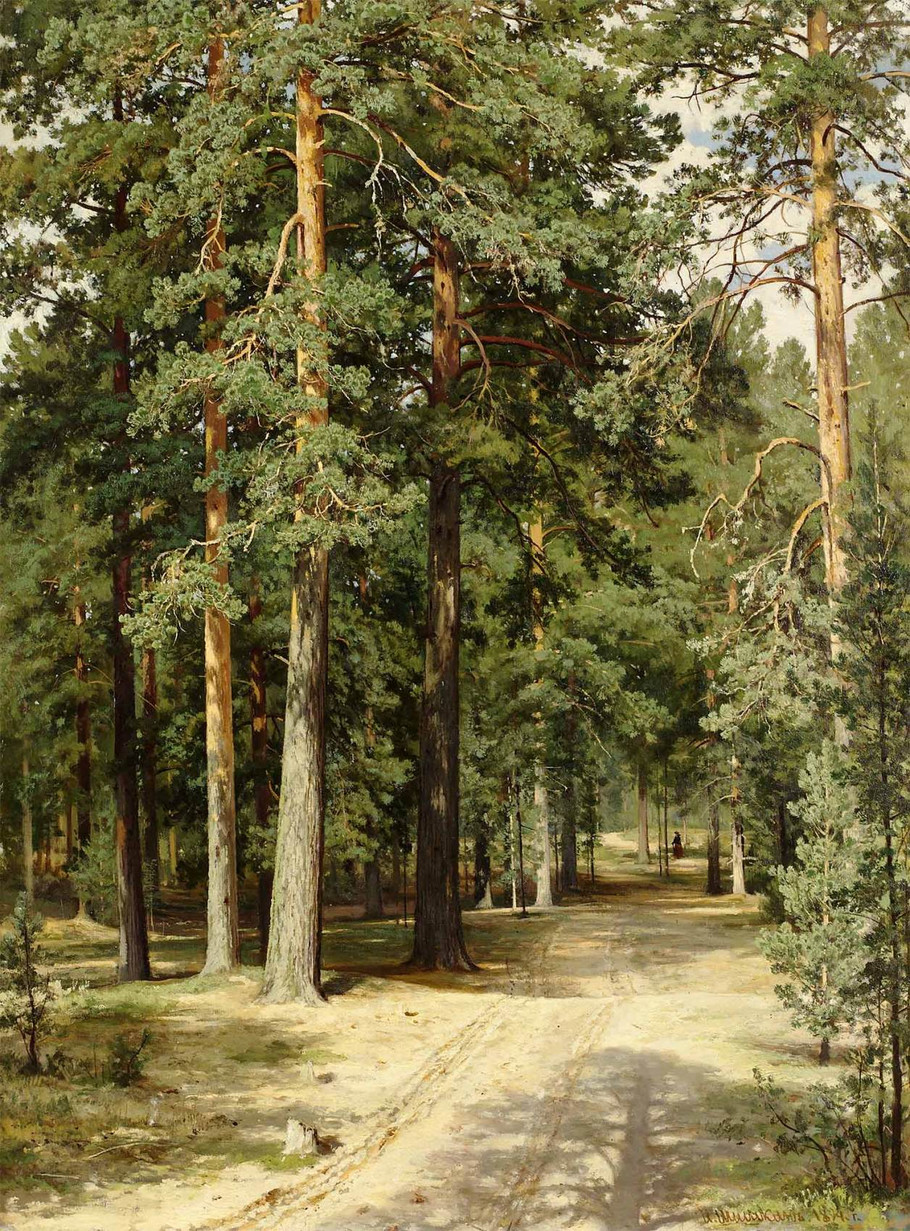 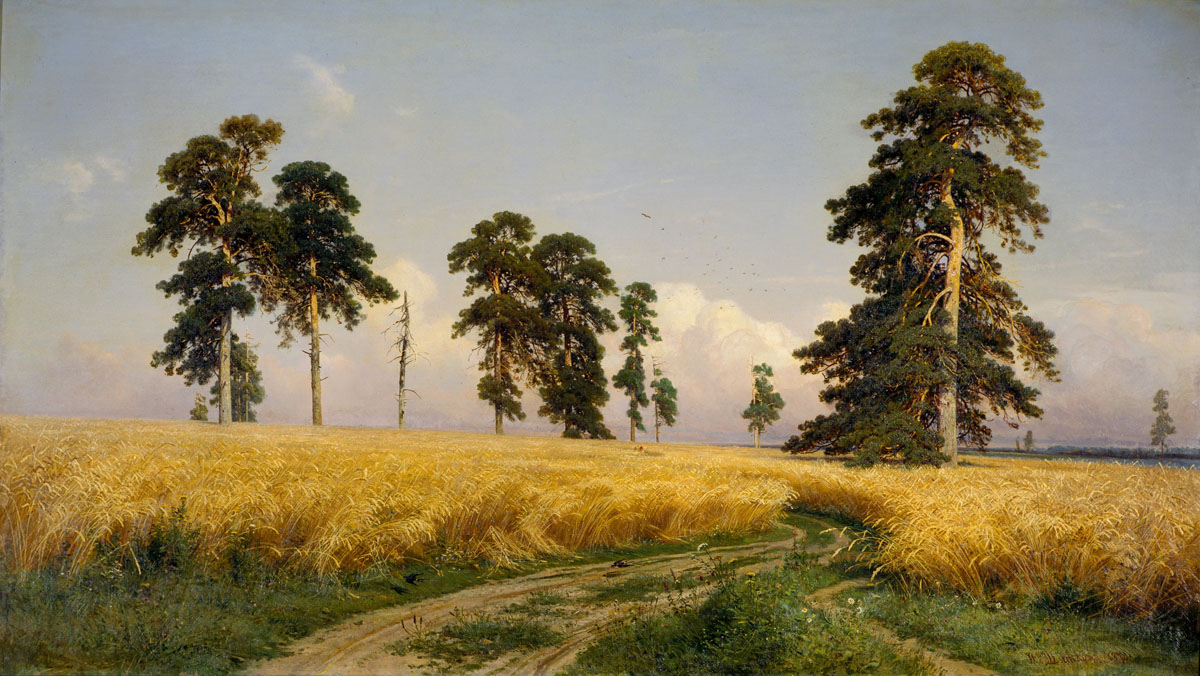 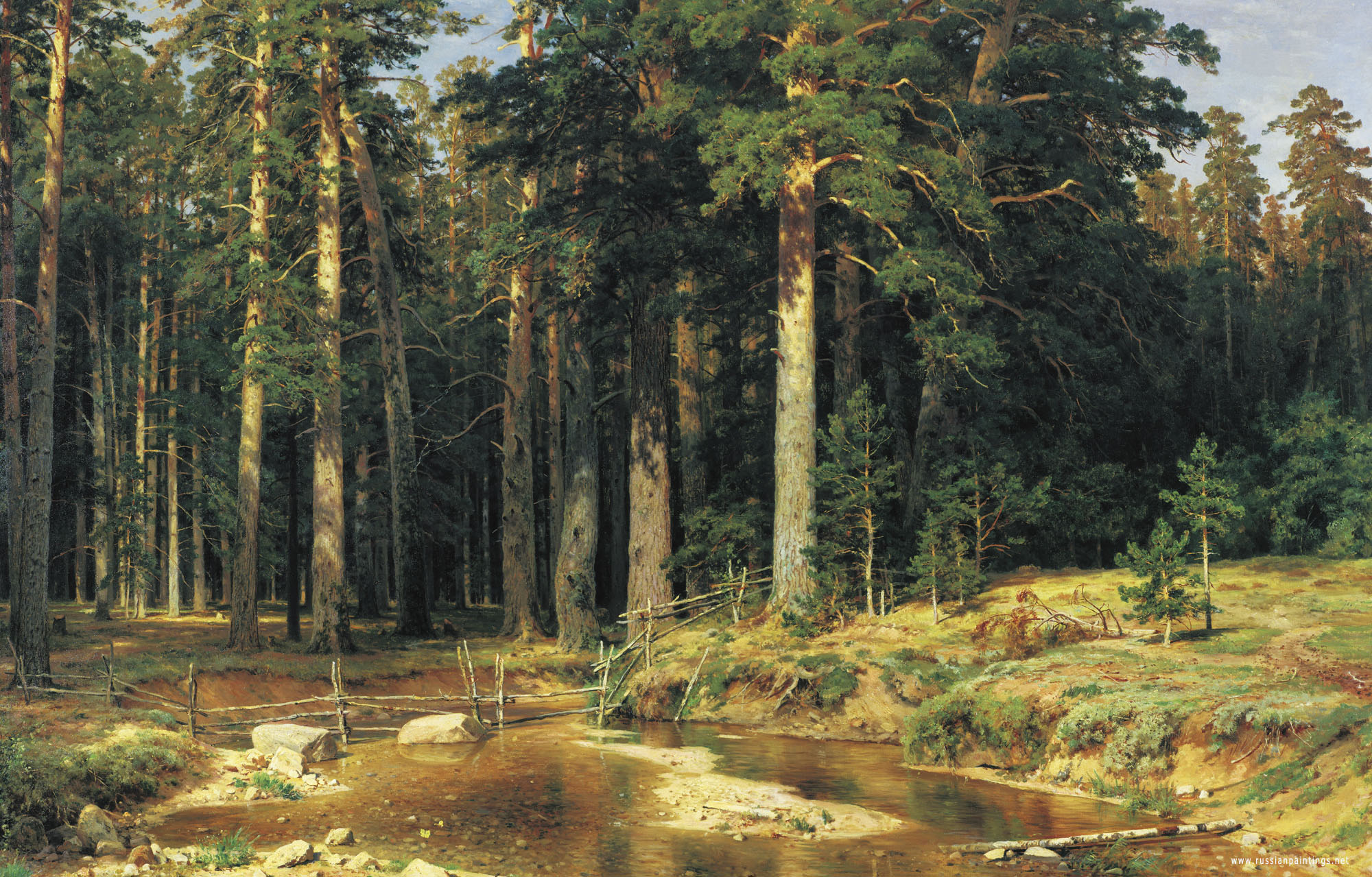 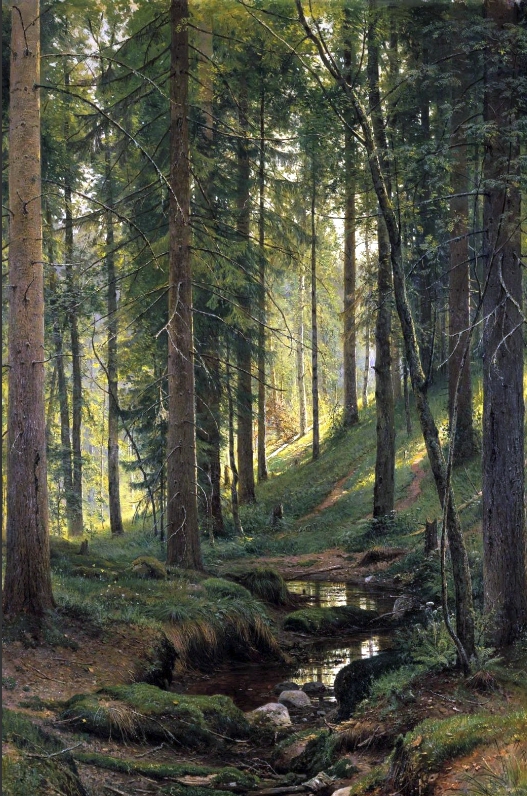 I began composing and planning my approach to the subject early in 2012, but decided it would be worth taking a much better digital camera back to the trailhead and shooting a much higher resolution photo than had been possible nine years earlier.  Waiting for winter snows to melt and other circumstances to permit a visit to the trailhead at an elevation of 9100-ft., it was June before Elspeth and I turned off the Scenic Byway and pulled into the trailhead parking lot.  The following photo is only a small part of a sight that took our breath away.

Disheartened but not dissuaded, I decided to cast my lot with the small-ish photo as reference, notwithstanding the great disparity between the small photo and its low resolution, and the huge scale at which I proposed to render the image.  For various reasons, brushwork did not begin until the fall of 2014, whereupon I worked on the original imprimatura while that year drew toward its close.


A change in technique

During this time, I began experimenting with the use of rubber "shapers" used by ceramicists.  I had used painting knives now and again for many years, but the wedges, as I like to call them, allowed me more control, tended to affect smaller areas of a painting, and did not always obscure the tool's point of contact with the painting (i.e., I could more readily see what I was doing).  Nevertheless, the wedges have not replaced painting knives in my technique.  Both tools still have their uses.

My primary reason for exploring possibilities associated with using wedges to apply and push paint around, instead of using brushes, had to do with one of the longest-lived conundrums of my work as an artist: Balancing the energy and kinesthetics of the act of painting with the emotions motivating the activity in the first place.  Closely related to this is the balance between articulation and summary in the image itself into a personally pleasing balance, as well as a balance between planning and serendipity in the creation of a painting.  This is a complex subject which exerts a profound influence on the artist; nevertheless, I will say only that the wedges were important in helping me move forward in major ways along that thread of my personal journey as an artist.

In the first weeks of 2015, with about 25 percent of the imprimatura done, I discovered that the imprimatura was not bonding with the tinted ground.   My time-proven methodology for creating the ground (i.e., Masonite panel, sanding, hand-layered applications of water-based gesso, tinting with Raw Umber (applied by hand and without turpentine or any other medium or solvent), then applying an initial color layer intended for the sky) was what it had been for years.  And with those layers of gesso dry, I was attempting to ghost-in the trees in a Green oil paint.  The problem had to be the pigment.

Nothing could resolve the problem except removing the imprimatura, which I did by scraping it away.  With that removal completed, I prepared to embark upon another monochromatic imprimatura, this time using Burnt Sienna straight from the tube.  Burnt Sienna, being an earth tone, is a thirsty, fast-drying pigment that can actually dry by the end of a day's painting session.  Like other earth-tone pigments, it can be mixed with other pigments to serve primarily as a siccative, if nothing else.

I embarked on the second imprimatura in January 2015 and completed it by May of that year.  The imprimatura was done as a grid painting.  See Alberti's veil and the Tao of art for detail.  The project history for Trailhead records that by 2015 May 23 (when I finished the imprimatura), I had logged 35 painting sessions devoted to the Burnt Sienna imprimatura, and had completed the hand painting of 213 grid cells.

While I used wedges to paint the imprimatura, I sometimes painted the positive space by using the wedge to apply paint to the panel.  However, I also sometimes used the wedge to remove paint.  For example, the debris field at the bottom of the image, consisting largely of innumerable pieces of limbs was much easier to paint by applying a solid layer of brown paint to a cell (in the grid) and using the wedge to achieve the "positive spaces" in the image by scraping brown paint away.  It is my impression that what constitutes positive and negative space is a matter of personal preference that can change depending upon individual taste.  Sometimes, while rendering an image, I see negative space as positive and positive space as negative.  So, I am always painting the positive space; it is what I see as positive space that changes, depending upon which strikes me as being easier—at any given time or subject—to conceive of as what I am "applying" to the panel by means of the tool in my hand.

Finishing the imprimatura is a major milestone in any painting.  Doing so, however, is one of those points in the creation of a painting that requires breaking or ruining the painting in order to move forward.  I have very strong tendencies toward tonal work; in fact, I naturally paint tonally.  Consequently, whenever I get to this point in a painting project, particularly when I have spent as much time and effort on the imprimatura as I did with Trailhead, I am usually so enthralled by the imprimatura that it is difficult, emotionally, to "ruin it" by applying glazes, not all of which (in my case) are transparent.

In addition to everything else about the project that had already been challenging, I realized too late that I had made a mistake in applying the entire imprimatura over blue because the contrast range in the imprimatura was far less than it should have been.  The only thing to do was to correct the error by painting-out the blue in most but not all of the underpainting.


It is thought that there are two distinct mindsets in terms of creativity: One discovers by making and then coming to understand what has been made, the other sees a vision and then sets out to make or re-create the vision.  The former is vulnerable to quitting because of needed stamina for not knowing what one is doing or when the journey is apt to end, nor yet what the end will look like.  The latter is vulnerable to despair because the artifact created seldom measures up to the vison or pre-conception.  I am primarily, though not exclusively, of the former inclination or pre-disposition.  (See Creation Myths by Marie-Louise von Franz, pp. 66-72.)

Another disaster befalls the subject of the painting


From 2018 October to May 2021 January, no work was done on the project.  But from 2021 May to the following June, final glazing and treatment of the painting were completed.