After puzzling for three and a half years

By Elspeth C. Young
The Blessings Afar Off was painted by the artist in the studios at Ben Haven.

Methodology
This section presents only one or two items that may be of interest to professional artists, amateurs, and others interested in the work of the Studios.

These excerpts from Elspeth's Painting Diary during the creation of this painting provide a glimpse of the nature of this project: 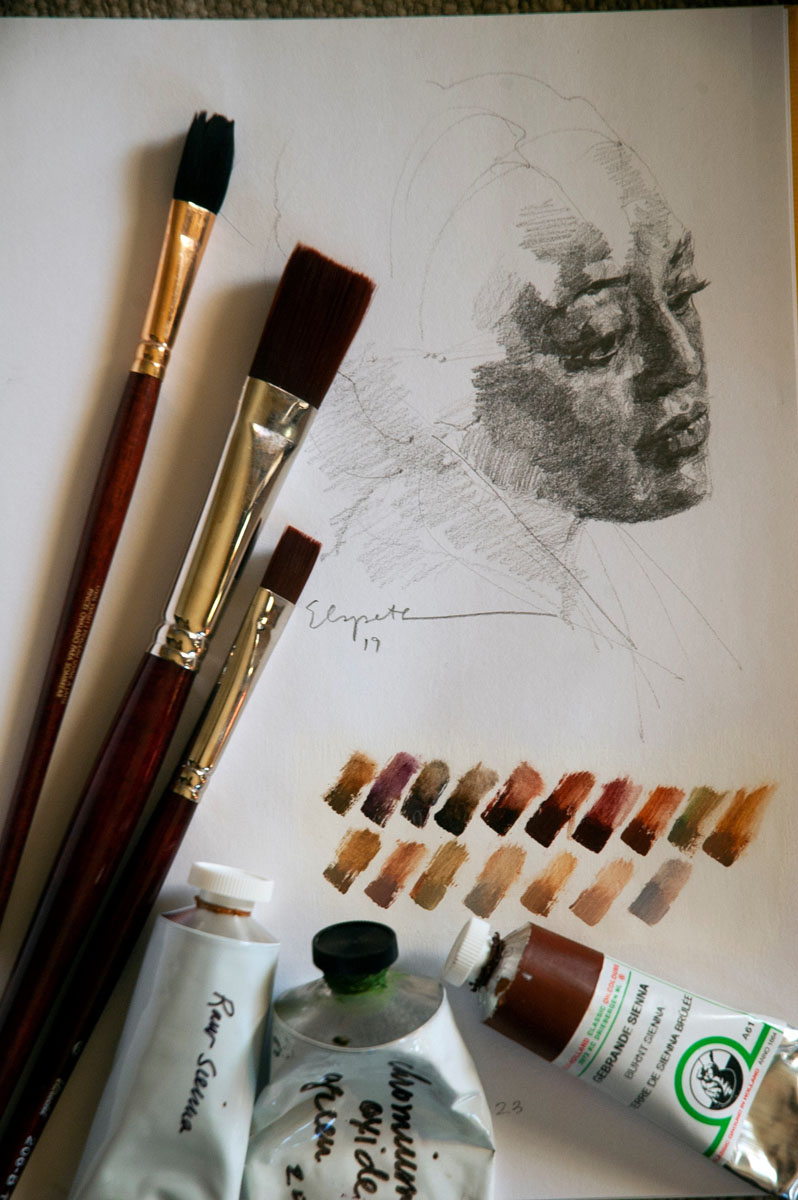 February 11, 2019
January 5th I began work in earnest on a 14- x 18-inch panel, using leftover paint at the end of each session working on another project, to rough-in a background for the stucco layer for the new painting of my grandmother.  But these under-layers were so magical, suggesting an outdoor twilight glow (happy accident!) that I decided to leave it as a painting background for my subject of model Jasmine McCall Adams.

I've been puzzling over the composition for a painting of her for almost three and a half years, but realized this week that it was because I was bent on making her subject a pioneer.  Realizing she could be Biblical instead, all aesthetic conundrums faded away and I knew she would ideally (and movingly!) express a Daughter of Onitah, willing to sacrifice her life for chastity.  I've been hard at it ever since and I'm pleased with the result.  I'm using myself as the model for the costume, in a vintage silk saree purchased from Dubai about four years ago.

February 23, 2019
At Last I begin to really see why my previous painting project for Caldera Engineering was so necessary.  As I have worked on the daughter of Onitah this week I have begun to use what I have learned these last few grueling months about how to listen to my heart; how to paint what is invisible—that which the Spirit impresses upon the eyes of my understanding.  Rather than being a figure painter acting as though I were just a camera with a paintbrush, I paint what is true and beautiful as my Art Heart dictates.  Yes, I use life to directly inspire that truth and beauty at the end of my brush, but my visual idiom (as Dad would call it) is changing to be a sketchy, scumbled-over-layer of color symphony atop careful and still painstakingly realistic under-layers.  I enjoy what is emerging. 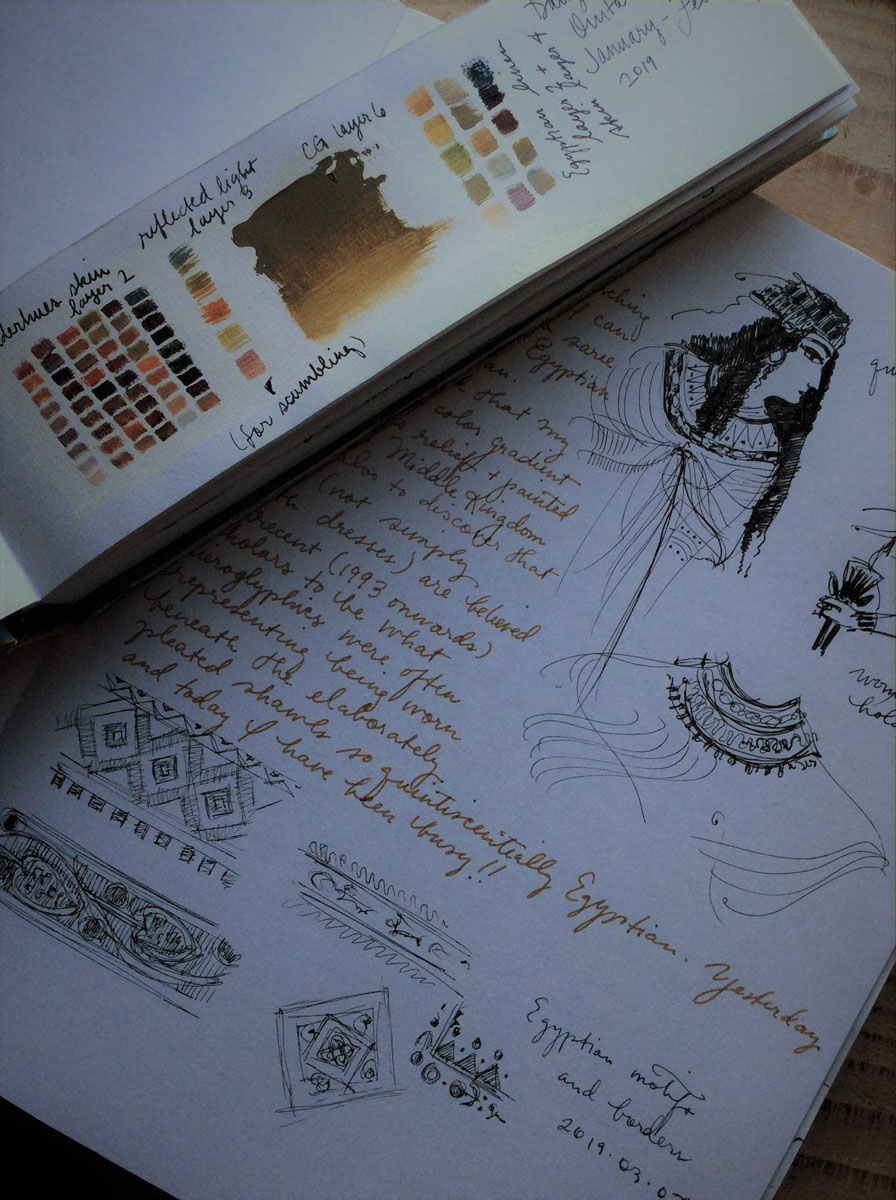 February 27, 2019
This week I've been painting up a storm on the daughter of Onitah; also participating in a research frenzy to ensure I can visually adopt a saree into an ancient Egyptian outfit.  And I can!  I am pleased that my background color gradient echos bas relief and painted murals in Middle Kingdom Egypt; also the discovery that the tunics and not simply sheath dresses, I believe by recent (as in 1993 onwards) scholars to be what hieroglyphics were often representing being worn beneath the elaborately pleated shawls so quintessentially Egyptian. 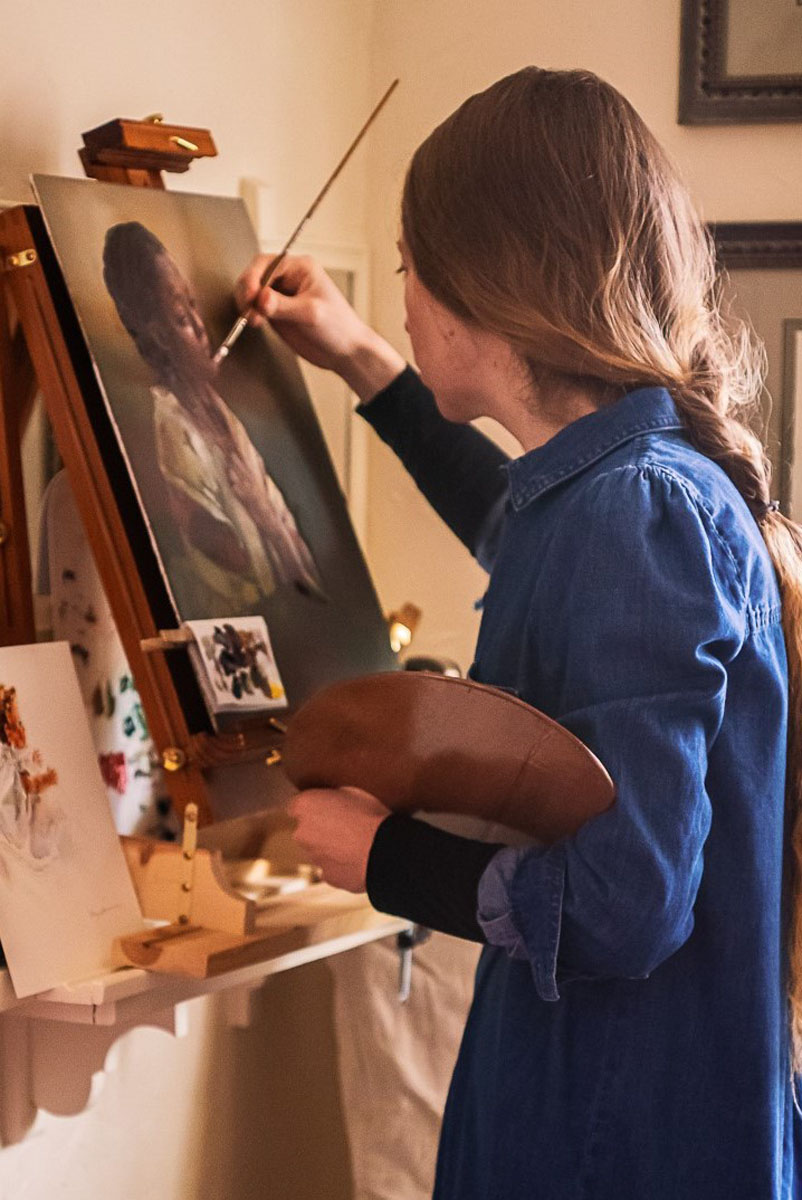 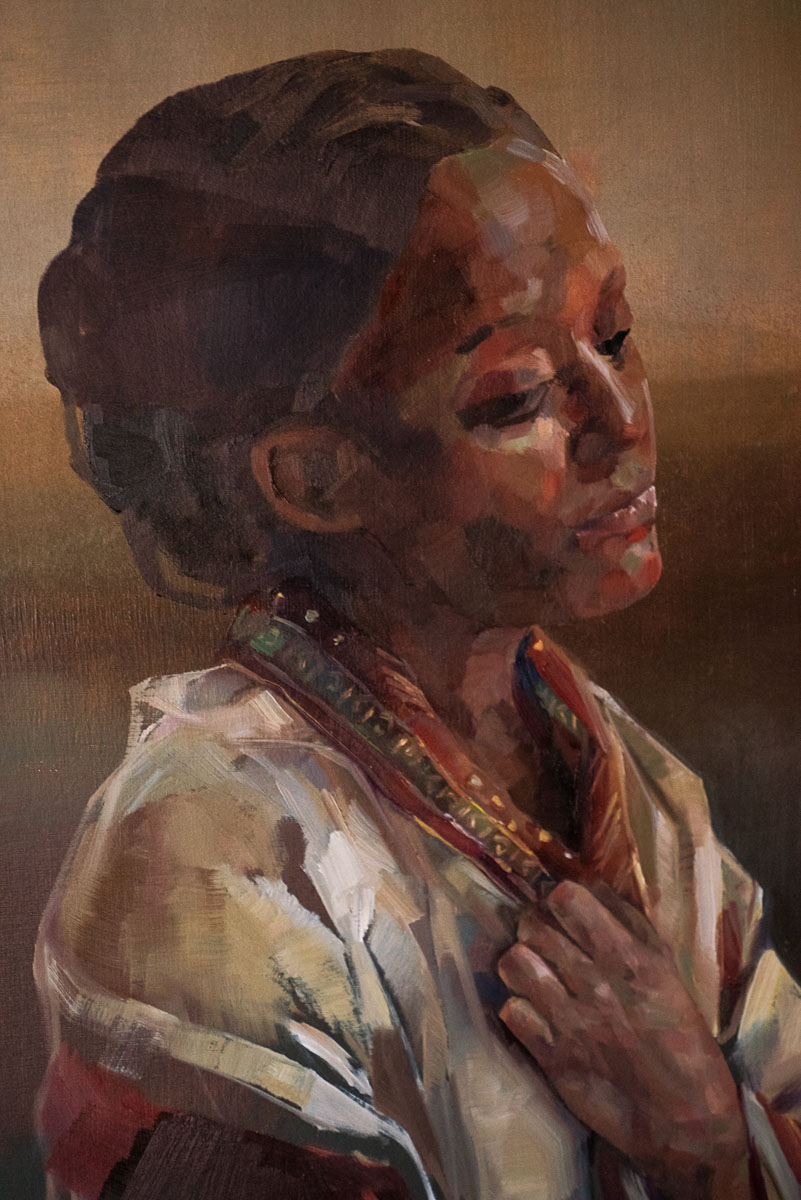 March 6, 2019
Work continues steadily on daughter of Onitah.  Research today clarifies the Egypt-Pharaoh-Canaan link which is otherwise a tad confusing.  In Hugh Nibley's Abraham in Egypt, pages 68 to 76, he explains that, at the time of Abraham's near-death encounter with Pharaoh's priest, Egypt and Canaan relate, perhaps politically (i.e. Canaan under Pharaoh's rule) and certainly by frequent comings and goings by the dignitaries of the day, therefore extending the priest's duties to both provinces.  Incidentally, Nibley places Ur of the Chaldees in Haran area.)

More interestingly however, is that at this time, Egypt "worshipped the star Sirius under the name of Shighre, Shagre, and Shagre-lan, their idiom means Shagre is God," p. 69.  This was the sun, or whatever star was brightest in this firmament.  So, through their choice, Onitah's daughters were remaining faithful to worshipping The Son (Christ) instead of the temporal sun.  Powerful!

March 7, 2019
I've painted the anenome, in the daughter of Onitah's hand, from life and the gold and linen in her costume is in its fifth layer of paint.  I love brushing thick, dry paint lightly over past layers without blending—growing closer to white with each linen layer.  Mom and I believe painting a suggestion of setting sun in the distance would balance the figure, while being nicely symbolic.
Mom has been in my studio, reading Caroll Rankin's “Dandelion Cottage” aloud.  I always paint best with her voice guiding my mood and my brush.  Mourning doves are nesting just outside my studio's north window.  Poor idiots.  Snow forecast tomorrow. . .

March 9, 2019
I'm becoming quite addicted to these new sort of color-field moody backgrounds I've developed with my own technique of scumbling and glazing in many layers (with brush or rag or both) over layers of Claude Green my nickname for mixing together all leftover pigment at the end of a paint day (named for my great-grandfather, Claude Hodson, who attempted only briefly to earn a living, during the Great Depression, as a house painter.  To his dismay the only color he ever succeeded in mixing was a drab green).

This technique was the perfect 5-layer base for an Egyptian Sunset I painted for a reminder yesterday.