By Al R. Young
Poor Greyfriars Bobby had to patiently linger once more, much as he did in Eleanor Atkinson's beloved story; though this wait was due to a major computer meltdown here at The Studios.  He's off and "louping" now, however, and should show up in some mailboxes as early as today.

Baroness Burdett-Coutts, the patroness of many a good cause, who magically materializes in Greyfriars Bobby as "the Grand Leddy;" was much older than she appears in this endearing portrait when she came to visit Bobby.  But the kind of silk taffeta plaid that can almost be heard to rustle in this image from the National Portrait Gallery of London by an unknown painter, is just what we were looking for to line and tie-off the "Pentland Farm Tam" designed and created by Elspeth for the Hearth article in Greyfriars Bobby.  We found a satisfactory alternative at a local shop.

Elspeth's article was simply too small to include all the tips, techniques, and other knitting secrets for knitting our one-size-fits-all "Scottish bonnet" pattern, so we include it here: 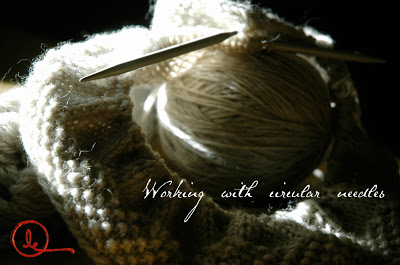 Choosing Circular Needles
Speaking from sad personal experience, not all circular needles are created equal.  The connection between the "needle tips" and the "cable" of circular needles can make all the difference between a happy knitting project, and a sore hand muscle nightmare.  Skacel's German-made Addi Turbo Knitting Needles are well crafted, quality needles, but are usually only available at specialty stores or online vendors.  For a more commonly available alternative, Clover's bamboo Takumi needles are also very nice.

Casting-On To Circular Needles
Having been taught to knit by my Swiss grandmother, I use the Continental Method of casting-on, but regardless of the method you use, the following images will help you.  Click on each thumbnail to see larger images and accompanying text.

Simply cast-on using your method of choice, being careful not to let the stitches twist and turn unevenly—make sure that each stitch is oriented correctly before you proceed to the first knitted row.  (A bit of my Grandmother's timeless advise—always cast-on more loosely than your accustomed tension.  This will, in large measure, prevent the twisting problem, and mean that your first row of knitting is not unbearably tense, or uneven.)

After the cast-on is complete, simply knit together the last and first cast-on stitches, and place a stitch marker here to indicate the beginning of the row. 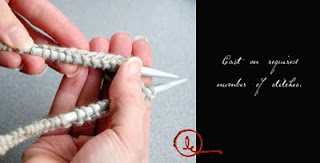 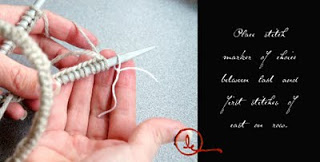 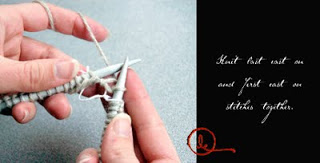 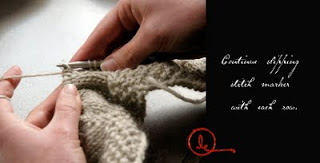 Homemade Disposable Knitting Markers
Circular needles require stitch markers, and though sets of wooden or plastic markers can be purchased at craft and yarn stores, such a purchase can unnecessarily drive up the price of a single knitting project, particularly if the need for such markers is a one-time event.  Any two-inch scrap of yarn or embroidery floss in a contrasting color to the one used for the knitting project can be tied in a square knot to form a loop, making the perfect stitch marker.  Not only are such make-shift markers inexpensive and disposable once the project is complete, they do not in any way affect yarn tension between the stitches at the beginning and end of rows.

(I know that if my Grandmother were writing this, she would insert a note here to say that a more relaxed, experienced knitter with not really need a stitch marker at all—particularly for a project as simply as a tam—provided the tail from the beginning of the cast-on is left long enough (3 or 4 inches) so as to be easily visible.)

Avoiding Dropped Stiches
Stitches still left on the needle tips of circular needles during non-knitting hours slip off easily and become "dropped" while the knitting is not in use (especially if a well-meaning family member happens to pick up your knitting to move it somewhere!).  To avoid such catastrophes, at the end of each knitting session simply slide the stitches from the needle tips onto the cable.  When you are ready to knit again, slide them back on the needles.  It's terribly simple and works every time. 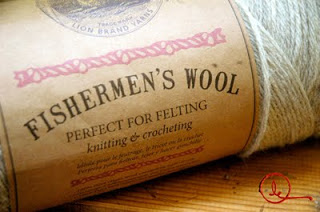 Choosing Yarn
As we hunted for yarn for the ideal yarn for the tam we created, we were completely enchanted by Lion Brand's Fishermen's Wool (ostensibly "perfect for felting," but also for any Scottish tam, scarf, or sweater), and snatched up a skein of a slightly hearthered Skye-terrier-gray, called "Oatmeal," for the purpose.  (We were equally taken with "Nature's Brown"--a deep chocolatey color, but one that would not show stitch nuances as well—and "Soft Cream"—though "Soft Cream" seemed an unlikely choice for a tam since it could be dangerously touchy.)