By Nancy Young
Traditionally our St. Nicholas celebrations have included fat loaves of grattiman (also known as grittibanz in some parts of Switzerland) and when the children were little the writing of letters to Santa to be picked up as he made his St. Nicholas rounds across the planet. But  even when there's no time or inclinations for such activities, there's still a part of St. Nicholas festivities that can fit in whatever the demands of the day--the commencement of a seasonal read of one our favorite tales, Hans Brinker or the Silver Skates by Mary Mapes Dodge.  Though we sometimes read the book page by page, we generally skip the the lengthy armchair tour and travelogue, and invest our hours (which pass altogether too quickly, by the way) in the story of the Brinker family and their trials and triumphs.

We've designed this abridged reading to begin today in celebration of St. Nicholas Day and end on the twentieth, the day of the the long awaited race for the silver skates, but it can be expanded or contracted at will.  (We usually can't wait and gobble the book up in a few evenings.)  There are two chapters per day and all are chronological with the exception of today's reading which jumps ahead to begin with the St. Nicholas celebrations at the home of kindly Hilda van Gleck and then moves back to introduce Hans and Gretel Brinker.  One caution, however, concerning the St. Nicholas chapter, there may be some hints about Santa that the reading parent may want to skip in behalf of any starry-eyed tots in the family. 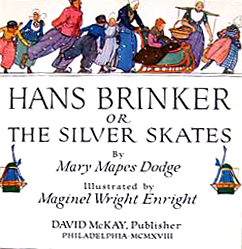 Our favorite edition is the 1918 Hans Brinker (pictured above) because of the delightful illustrations by Maginel Enwright--used copies of which are still easy to find from online sources.

For more ideas about creating a Hans Brinker Christmas, see Vol 4 No 1 of The Storybook Home Journal.