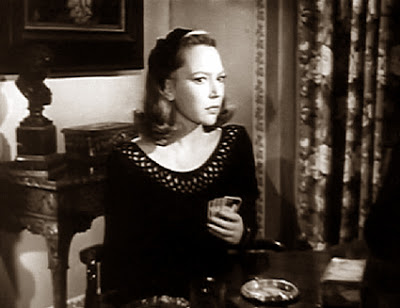 When I was very young my sister always won when we played Clue.  She was invariably Miss Scarlett—pictured on our playing cards as a film-noir starlet—young, glamorous, and forever unattached.  According to the rules, she always started first.  I was always Mrs. Peacock—elderly, stern and indomitable—widowed because she probably killed her husband so she could spend his money on the queen-for-a-day tiara and blue earrings she wore.  I always started last.

Of course there were the other suspects—Professor Plum who looked like Einstein after some serious time at the barber's; Mrs. White who looked like Bessie-the-Cook at our elementary school; Colonel Mustard who suggested Clark Gable with his ears flattened; and Mr. Green who managed an appearance both nondescript and guilty.  (On the rare occasions when we could get my older brothers to play, everyone shied away from being Mr. Green.)

It took a long time before I detected just how my sister always managed to solve the case in such short order.  She was eight-years-old and I was four.  She could read and I could not.  She graciously marked my cards for me.  Only two of us played.  You do the math.

I'm not sure, but I believe my keen interest in the mystery genre began then.  And while I appreciate why-dunits and how-dunits, I adore a good whodunit—one low on gore, but with an adequate stockpile of clues and an equivalent stash of suspects.

About the same time that Anthony Pratt was filing for a patent for his game Cluedo, (shortened to Clue when it arrived on our shores in the probably-all-too-accurate assumption that Americans wouldn't grasp a pun based on Latin terminology) a game Pratt reputedly invented to literally kill time in WWII air raid shelters, two defining and campy whodunits were being produced: Rene Clair's And Then There Were None (1945) and Sidney Gilliat's Green For Danger (1946). 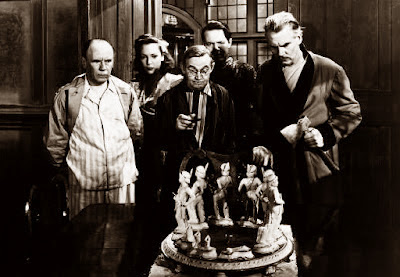 And Then There Were None, based on the Agatha Christie play and her novel, Ten Little Indians, is a whole lot like a game of Clue in that it takes place as part of a house-party, involves both guests and servants, has varied murder weapons and locations, and solutions to the mystery begin to emerge as one-by-one the suspects are eliminated.  Unlike Clue, however, these suspects are eliminated permanently with the modus operandi following the children's rhyme and song, "Ten Little Indians."  (Incidentally the tune to the song may beat in your brain for a day or two after watching.)

The film plays murder on the light side—a ploy that resonates through many subsequent whodunits—though a great deal of its cleverness derives from its canny casting.  Instead of ten of the biggest stars in Hollywood to headline the film, its crew is mostly made of the finest character actors of the day— a cast more-or-less composed of best supporting actors.  Louis Hayward and June Duprez technically fill the more traditional concept of leading roles, but are as lost at sea as the rest of the players—except, of course, for the always-two-jumps-ahead manipulating mastermind committing the murders, whose identity isn't revealed until the very last moment.

And Then There Were None spends as much time poking the audience in the ribs as it does stabbing victims in the back, but there's no doubt its mood includes the macabre —so little ones may want to grow a bit older before they join in the armchair detecting.

The same goes for Green For Danger, where there are enough moments of eerie suspense to earn it's title as a thriller, and make it best for children who've made it beyond the scared-of-the-dark phase; but there's also enough humor to make it a fine re-watch even after the mystery's gone.  The comedy grows out of Alastair Sim having way too much fun with his interpretation of Christianna Brand's staple Scotland Yard sleuth, Inspector Cockrill. 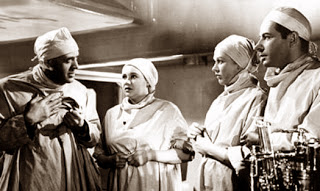 The story is told as one long flashback after Cockrill has solved the case and is writing his report concerning three deaths at Heron's Park Emergency Hospital during the final, weary year of WWII.  The suspects are presented early—all doctors and nurses from one operating theater working tensely to save lives while doodlebug raids rain down upon them and the neighboring countryside.  There are loves that have been, loves that are, loves that will be, and loves that are triangular, not to mention, of course, murders, amongst a very fine cast of British actors—Trevor Howard and Leo Genn (who incidentally was in the 1965 remake of Ten Little Indians) being the stars that most American audiences will recognize—though Meg Jenkins' long career will always be memorable if only for her delicious voice quality.  But this is Alastair Sim's show and he's just plain fun to watch, and the movie left me, at least, wishing that there would have been more adaptations of Brand's mystery novels for film with Sim in the lead.  Green For Danger is blatantly the prototype for the best of British television mysteries—taut and intelligent with a laugh to relax suspense at all the right moments.

I suggest you will enjoy these films in your family room with a bag of hot-buttered popcorn.  Can anyone prove me wrong?