Forgotten Films: Back to school, back to football, back to film (Trouble Along the Way (1953) and The Happiest Days of Your Life (1950) 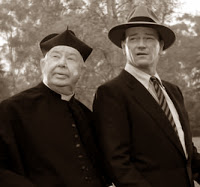 Some days your brain needs a rest.  If you're in a workaday world or a school-a-day one, that time may be Friday night, the longest possible respite from the end of the work week and the ever advancing Monday morning.  There may be homework or yard-work coming Saturday morning, social engagements Saturday night, and church services on Sunday, but on Friday night, you may be able to go at least a couple of hours without thinking a whole lot—making these two films are a perfect Friday fit—especially at the beginning of a new school year and a fresh football season.

Trouble Along the Way

I have a hard time thinking of a Charles Coburn film I don't like.  I'm sure there must be some—but I really don't want to think too hard about it.  Coburn was such a pleasing blend of classy and comical, irascible and loveable and seems to crop up in film after film that I love already—and then love more for what he in particular adds.  He seems to have played every part from confidence trickster to wealthy businessman (yes, there can be a difference) to social-climbing aristocrat to police inspector.  In Trouble Along the Way, he portrays Father Matthew William Burke, the comfortable, comforting, slightly curmudgeonly dean of a New York City Catholic college, St. Anthony's, that's failing to pull its financial weight. Believing a great football season would be just the ticket to solve his solvency woes, he begins to pull together a dream schedule for a yet-to-materialize dream team. 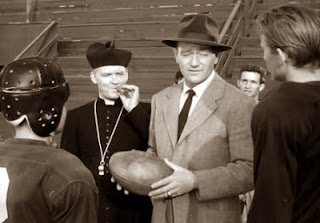 If it was 1953 and anyone needed a leading man with the bravado and brawn to solve such a problem, the solution, of course, would be John Wayne, starring here in one of his rare roles where he isn't a cowboy, a Calvary officer or a combat soldier—instead he's a coach named Steve Williams who's not over-nice about his ethics and therefore is currently out of work.  He's also the custodial parent of his daughter, Carole, played by child-star Sherry Jackson, who owns no dresses and is way-too-familiar with veer splits and assorted methods of ducking grade school. Of course for every custodial father, it follows there must be a non-custodial mother.  And in a mid-twentieth century film with a caring, but somewhat roguish, best-friend- father, the mother's bound to be more concerned with chattels than children.  Marie Windsor gets that role as Wayne's ex-wife, a woman who left husband and daughter to successfully climb the social ladder, but now wants not only to eat her Park Avenue piece of cake, but have Wayne around to serve it up to her.  With all the scruples of a well-coiffed black widow, she involves a vulnerable young social worker, Donna Reed, to prove Wayne's unfitness as a parent so she can use her daughter as a bargaining chip with which to restore Wayne's attentions.  And the "trouble along the way" hasn't even fully begun yet.  Keep in mind, however, that for all the Peyton Place portents this is, after all, a comedy, so sit back, don't think too hard and just enjoy.

The Happiest Days of Your Life 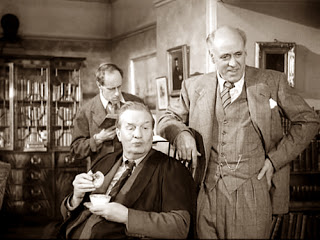 I once read an article—I think it was in TV Guide—that indicated the real way to tell the difference between men and women is the ability to remain in the room while a Three Stooges film is being re-run on television.  (Purportedly men sit down to watch—women swiftly escape.)  Less readily recognized is why some people adore British comedies and others simply don't perceive much to laugh at.  We happen to be Anglophiles particularly when it comes to humor (as well as whodunits)—and this archly witty film improves for our family with every watch.
Though Charles Coburn often headlined films, it was always shared glory with some stunning leading lady and her striking lad.  Only in a British film made prior to 1960 could you find a male lead whose good looks are strictly a matter of his rumpled distinctiveness and a female lead that could scarcely fit her arm into the waist of any size 2 article of clothing.  But in this film the pretty people enjoy modest roles and the wonky ones get nearly all of the attention and all of the best lines.

Weatherby Pond (Alastair Sim) is the headmaster of Nutbourne College for boys, but is hopeful of a similar position at a more prestigious Eton-esque prep school and is putting his staff on alert for a visit from the trustees of the grander college as he wishes to make as fine an impression as possible.  It's the beginning of the new school term and as the boys are about to return, the luggage of another prep school's returning students is delivered, followed by a letter announcing the addition of a second academy, St. Swithin's, with about as many students and faculty as Nutbourne.  Sim sees it as an opportunity to astound the coming trustees with his facility for managing the unexpected and welcomes the addition—at least until he discovers that the interlopers are all female. 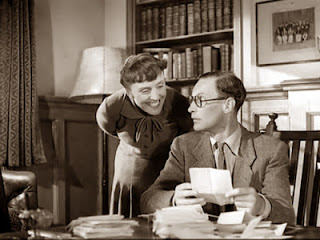 Muriel Whitchurch (Margaret Rutherford) as the headmistress of the girl's school is equally appalled; but of course The Ministry of Education who created the kerfuffle—and is the only agency that can undo the damage—is on hiatus and so Rutherford tries to make the best of the situation setting her inexperienced domestic science students to cook and commandeering Sim's quarters and office.  In a grudging alliance between Sim and Rutherford, the error is kept a secret by both schools anticipating both a quick resolution to the problem as well as widespread parental shock and disapproval if it's revealed—but the shock is much swifter in coming than the resolution (and when it does come there's an even greater shock.)  Wonderful Joyce Grenfell—who always managed to make any role, however small, a delight—plays an awkward P.E. teacher; and Richard Wattis is particularly fine as a sardonic Chemistry professor busy pitching out quips while evading Grenfell's lovelorn pitches.  A precursor of the popular St. Trinian school comedies, there's a naïve zaniness and lots of rapid repartee here that's just plain fun and easy on the gray cells. 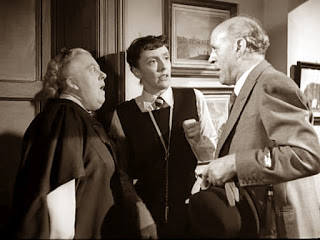 Both Trouble Along the Way and The Happiest Days of Your Life have a bit of mild sexual innuendo that arises from the situations of their comedy.  In addition Trouble Along the Way does stumble a bit on some sexist stereotypes.  It's more redeeming aspect, however, is that deviousness—even on the part of the hero—is punished rather than rewarded, and even blinded naïveté ultimately finds correction as well.