COVID-19 info for January 2022: We're still open online! We now accept PayPal, all major credit cards and Venmo (via PayPal). We've permanently discontinued in-store pickups, replacing those with free expedited shipping on oil paintings and art prints. Most orders are fulfilled on schedule by us or directly through our manufacturing partners.

In the post-Christmas and early January days of eating, shopping, and watching bowl games and parades, two films are well worth chancing after your favorite team has been knocked out of contention or the computation of how many daisies, roses, and gardenias went into making barge-sized parade floats just doesn't hold your interest. Both films are holiday-ish, without being overtly so, and therefore tuck very neatly into the after-Christmas days—particularly since they're all about happiness being more important than money (something it's good to remember when all the funds vanished under the Christmas tree). They're also about hollowness of social standing (something it's good to keep in mind when you still can't afford that BMW, no matter how good the year-end lease arrangements might sound). Holiday (1938) begins on Christmas and ends in the first days of January. The Late George Apley (1947) begins at Thanksgiving and ends in June. Both are adaptations of very fine plays; and each is just over an hour and a half long, so neither need cramp too many lingering holiday festivities. 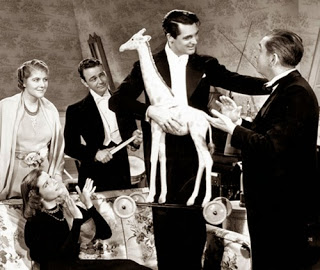 Holiday tells the tale of the love-at-first-sight and the instantaneous engagement of two twenty-plus-somethings (played by Cary Grant and Doris Nolan) while on on holiday at Lake Placid. The holiday is quickly over, however, as Grant discovers that his bride-to-be is the second daughter in one of America's fully-stuffed-shirt "sixty families." And in the family, all that wealth and influence cannot be handed over to a man—no matter how dashing and self-made—without an effectual struggle, particular in view of the fact that his "mother was not even a whoozits." However, at the culmination of a successful stock deal, Grant comes to be deemed fully acceptable to his manipulative fiancée and her domineering dad (Henry Kolker). But the elder daughter (Katherine Hepburn) likes him with or without funds, and heartily approves of his plan to take his earnings and enjoy an extended holiday in order to find out who he really is and what he really wants out of life. Some distress, some fun, and the remainder of the film ensues.
Holiday is one of several films that match-up Cary Grant and Katherine Hepburn in starring roles, although it's less touted than Bringing Up Baby or Philadelphia Story. Holiday lacks the performing finesse of either star, showcased, for example, in Philadelphia Story—they recite many of their lines as though the film were still on-stage and they had to project their feelings to the back row (perhaps, in part, because Hepburn understudied the role of Linda Seton in the original play)—but there are still some wonderful lines and delightful deliveries that more than compensate. On hand, and very loveable, are Jean Dixon and Edward Everett Horton as Grant's dearest friends; and also on hand, though tragically loveable, is Lew Ayres as Hepburn's younger should-have-been-a-musician-but-instead-is-an-alcoholic brother. Don't be frightened: this is a comedy, after all, and some great repartee and true love win out in the end.

In the midst of the fame and fortune resulting from his iconic "Mr. Moto" novels, John P. Marquand paused long enough to write a Pulitzer-Prize-winning novel satirizing Boston's uppercrust: The Late George Apley. Apparently already uncomfortable with looking on while the term "loosely based" modified his Moto books into film, Marquand collaborated with fellow Pulitizer-winner, George S. Kaufman, to transform his largely epistolary novel into a play. Kaufman brought a large measure of his genius to bear in the very clever dialogue, and the themes and characters remained fairly intact. Critics were mystified, however, when the 1947 Hollywood film version appeared and moved farther away from both novel and play. I admit to being something of a novel-to-film purist, but since the list of people who have either read the novel or seen the film is relatively slim, I can say—even though Marquand would roll over in his grave—I really love this film for its own sake. Of course, like Holiday, it suffers some from the are-we-making-a-film-or-filming-a-play dilemma, but I don't mind a bit being charmed and having a good laugh into the bargain. 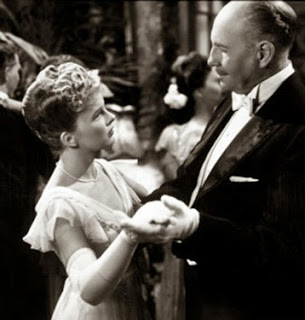 Percy Waram, who reprized his role from the original Broadway play, steals the show, but everyone, especially Mildred Natwick as his haughtily silly wife, seems to be having fun. Dapper Ronald Coleman, who plays the title character, makes an unexpectedly delightful curmudgeon; and I rather enjoy the fact that he learns to remove a good deal of starch from his stuffed-shirt persona during the course of the film—however contrary to the novel the change might be. British-born actress, Peggy Cummins, arguably has too much of the nineteen-forties in her dress and demeanor to be believable as a turn-of-the-century belle, but her endearing voice quality and enunciation make up for it.

So, if you want a cerebral satire, read the novel. If you want to laugh and relax at the end of the holidays, watch the film. And since neither have a whole lot to do with each other, you can readily do both without much harm to either, let alone yourself.