A painting is not finished when it's done

By Elspeth C. Young
One thing I've learned over recent years is that no painting is finished when it's done. The subject matter and the symbolism a painting contains never ceases, as long as there are real people looking at it. In fact, the essays accompanying our paintings don't even begin to really tell the "story in the painting," since that "story" adapts to meet the gaze of those who bring new perspectives, experiences, and insights to that image day by day. Just like the scriptures, themselves, provide a mirror for us in which to see our own life's experiences and challenges and their solution, so any artistic expression invites personal application. 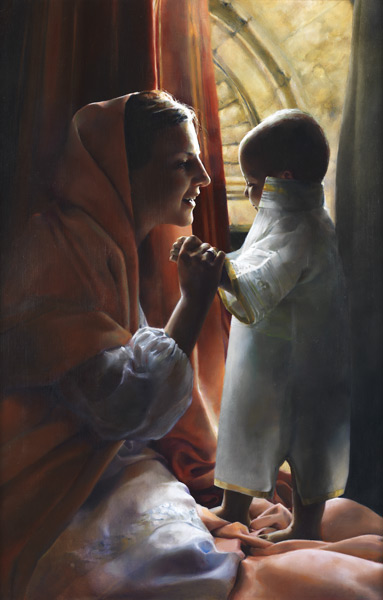 No painting I have created has shown me this truth more vividly than For This Child I Prayed. When I finished my depiction of Hannah and her infant son, Samuel, in 2008, I really thought it was done! Little did I know how many mothers and fathers, husbands and wives, grandfathers and grandmothers would enrich the "story" in that painting: how many soon-to-be-parents hoping to raise their child in righteousness would relate to Hannah's noble parenting; how many praying-to-be-parents would identify with Hannah's faith in precious promises foretold; how many families praying precious infants to earth knew first-hand stories of "miracle babies" every bit as miraculous as Samuel, though doctors had labeled such impossible. Countless have been accounts of seemingly "barren" parents for whom Heaven provided adopted children—equally miraculous answers to prayers of faith, and devoted sacrifice. I have even heard from mothers wearied by worry and toil, but lifted by the courageous parenting of such a one as Hannah. One particularly poignant story tells of a faithful father and mother blessed to hold their tiny newborn infant in their arms for just one hour before it passed beyond this "frail existence"—for whom even that "one hour" was another answer to their family's heartfelt prayers and earnest fasting.
Several months ago, I heard from another new mother—Hannah-like-years in the making—beaming with the news that adoption of her new little son was being finalized so that a Temple sealing ordinance could take place, and their family could be forever. She wrote to ask if we had a pattern for the costume Samuel wears in the painting so that she could make her own (a unique and delightful request!). She wanted, Hannah-like, to sew for her son—one tunic in glorious white for the Temple, and one with gold trimming for his baby blessing. I replied that my father (Al R. Young) had designed and created the costume, itself, but that no pattern was extent (as he always amazingly whips up designs out of thin air—magical, really!). Apologetically, we simply sent her pictures of the tunic to help her in her task, hoping it might be of help. 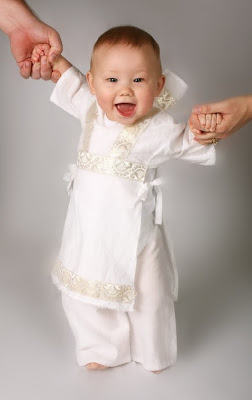 A couple of weeks ago, we received the beautiful image of her newly sealed son grasping his new parents' hands, and wearing his mother's own adaptation of Samuel's tunic as seen in the painting. So contagiously happy and miraculously wonderful was this little one that we couldn't resist sharing this mother's own "step inside" the scriptures.
The photograph, above, was taken by LaRell Steele, All Rights Reserved.

Tags: For This Child I Prayed, 2011, Costume and props, Tools supplies and operations, Women of the Bible Art Collection