Adding a wall-mounted easel to the south wall

By Al R. Young
Like the vernacular style in architecture, do-it-yourself tends to become more and more organic as time passes because modifications and repairs accumulate.  Perhaps nowhere in the studio is this more evident than the Landscape Easel on the south wall.

In fact, in 1992, the easel didn't even start out as an easel, but as a set of two, 10 ft. long, wall-mounted drying shelves supported by homemade corbels.  A 1x8 served as the bottom shelf in the set.  The top shelf was a 1x6 nearly 3 ft. higher on the wall than the 1x8.

This use of the wall and shelves continued about eight years; that is, until I was commissioned to paint The Grey Havens, a horizontal oil painting 4 ft. high and 7 ft. wide.  The south wall was the only place in the studio that could accommodate seven horizontal feet of a painting project.

Instead of removing the shelves, I simply added a ledge (B) to the front of the corbel (A) supporting the lower shelf.  The ledge supported the bottom of the horizontal panel, and the top of the panel leaned against the front of the upper shelf (not shown in Fig. A).

At B in the foregoing diagram, grab screws were used to attach a horizontal 1x2 (B), about 1 ft. long, to the side of the corbel.  The hash marks at the left end of the 1x2 (in Figure 1) represent the end of a 1x4 installed as a shelf between another horizontal 1x2 similarly attached to the face of one of the other corbels. 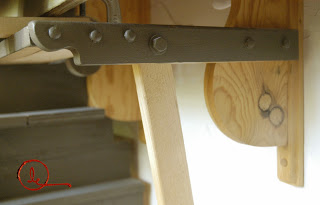 A block (near B, in Fig. 1) on top of the 1x4 shelf serves as a stop, to keep the painting panel from falling off the shelf.

The diagonal brace at C (in Fig. 1) extends from the horizontal 1x2 to the wall, where the brace is attached to the wall just above the baseboard (see the photograph below).  This method of bracing the easel-shelf keeps the shelf support away from the floor, which simplifies construction, leaves floor space free, and does not disturb the floor covering. 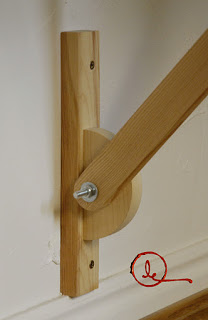 This configuration lasted for another five years.  By that time, I had grown weary of the lack of convenient storage space under the easel. In 2005, I added palette-storage shelves, a brush rack, and a retractable palette to the space immediately below the panel-shelf and between the two diagonal braces. 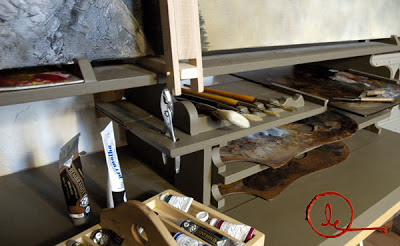 Since 2005, most of the work of the studio has been done on other easels primarily because of lighting and the size and orientation of paintings produced.  However, two things have been added to the south wall during the past six years:  A counter top and a folding frame (mounted to the front of the Landscape Easel so that the area can serve either as a working easel or a drying shelf for large paintings. The counter top (added in 2008) was mounted to the wall just like the easel. 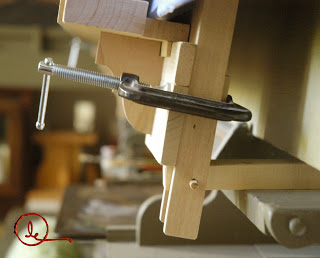 
The folding frame consists of two upright sides, joined at the top by a horizontal member. 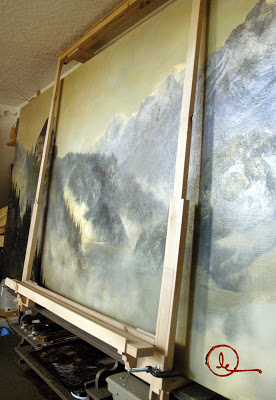 The horizontal member at the top is fitted with a plate that rests against the wall.  And, attached to the wall where the upper cross-member rests, a ledge was mounted into studs so that the top of the frame can be clamped to the ledge.  This secures the top of the folding frame. 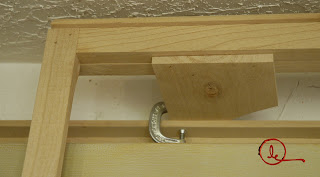 Whether the easel is used for painting, drying, or storage, it significantly enhances storage space as well as the number of projects that can be in-progress simultaneously. 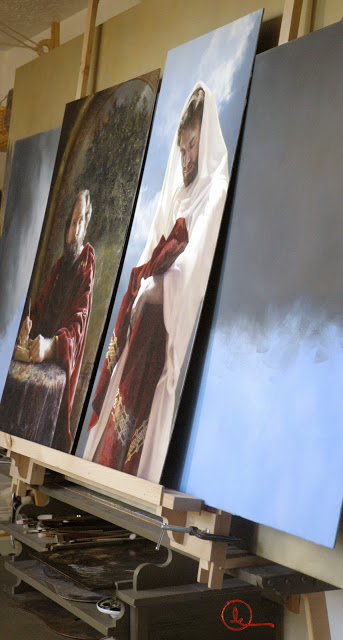