By Al R. Young
The palette cart is one of three unassembled, metal-frame trolleys that came to the Studios several years ago from a furniture liquidation sale.  The cart remodeling described in this post results from the intervening years of its use -- usually an excellent source of the best ideas.

In the following photograph, the bottom shelf of the trolley stores accessories like brush holders, wooden blocks, and easel attachments.  The middle shelf is home to a basket of clean rags and a wastebasket with a lid (oiled and waxed).  The lid, made from 1-in. stock, is kept in place when on the trash can, by means of a smaller disk cut to fit the circumference of the inside of the wastebasket.  The handle is an ornamental finial. 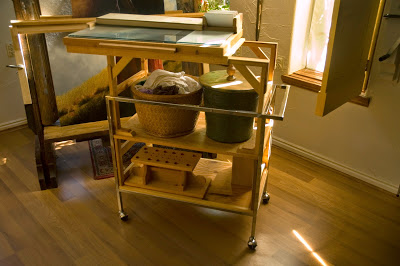 The top shelf rests on 1x2s rising from the corners of the middle shelf.  The base of each of these 1x2 legs is reinforced by a 1x2 secured flat against the surface of the middle shelf.  This approach to supporting the shelves in the wooden structure of the cart does not require that anything be screwed into the metal framework, ensuring that it remains fully reusable.  Horizontal braces at each end of the cart reinforce the uprights and keep large objects from falling off the shelf.  Diagonal braces at the top of each leg reinforce runners on which the palette rests. 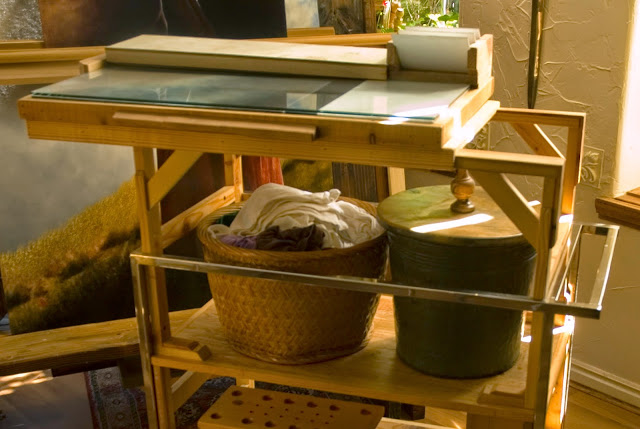 In the photo, below, the right side of the top shelf is inset from the edge of the cart to allow easy access to the wastebasket while painting.  The 1/4-in. glass of the palette covers three pieces of toned Masonite.

Along the back of the palette, is a cover for the strip of denim on which brushes and painting knives can be wiped clean (with or without a solvent).  Many years ago, I used old telephone books for this purpose, but have for a long time preferred denim because it is absorbent, offers a mild texture, does not smell like an old telephone book, and one strip can be used for multiple sessions.  Furthermore, tearing pages from a phone book just did not consist with the choreography of painting sessions.

To the right of the cleaning strip is a set of cards on which I clean off painting knives when they are loaded with a lot of paint.  Multiple cards allow the convenient saving of related colors.

The next photo shows the tack strips by which the denim strip is attached to the palette.  Between the tack strips, a gesso-covered piece of Masonite helps ensure that paint and solvents from the denim can be removed.  Use pliers to install and remove the denim.  One of the primary functions of the cover provided for the denim is to prevent injury from the tack strips, particularly to studio visitors who may not know about the tacks.

The small gesso-covered cards in the knife scraper can be removed for thorough cleaning. 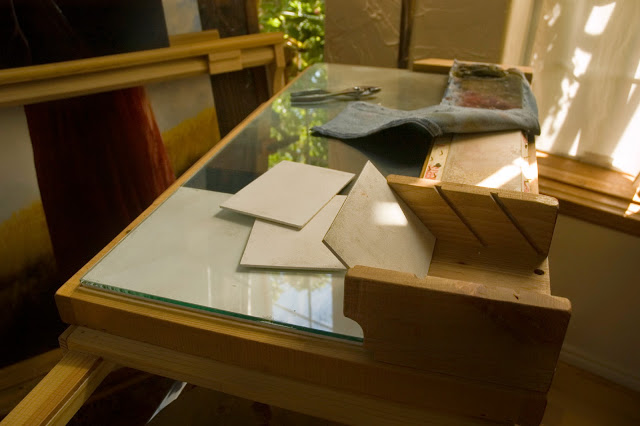 Finally, this photo shows that the palette is a hinged door allowing removal of both the rag basket and the wastebasket.

Remodeling the cart also involved a problem with the casters. They were held in place by a plastic insert that provided a housing for the shank of the caster.  Adding to the cart the kind of weight introduced by the wood framework, not to mention other features, was more than the plastic housing was designed for.  Replacing the plastic housing with a hardwood block, drilled to accommodate the shank, solved the problem.