In the fall of 2012, the Studios was commissioned to paint a tetraptych consisting of individual images measuring 13.5 in. wide x 186.5 in. high.  The tetraptych was supposed to present a scenic image, not necessarily a continuous image, as though the entire image could be assembled by a contiguous arrangement of the panels, but coherent in the sense that windows onto a particular scene present portions of the same.

We decided to use Masonite as the support.  The only Masonite conveniently available for the project allowed for a maximum length of 8 ft. (96 in.).  Based upon design considerations we chose to subdivide the support for each image into three panels (all of the same width) whose heights were 31.75 in., 96 in., and 58.75 in.

The next part of the story problem was not, strictly speaking, mathematical, but influenced the outcome nonetheless.  I wanted the fluidity of my brush and knife strokes to flow seamlessly across the two seams between the three panels in each image.  I also wanted to be able to stand at each seam as though I were painting comfortably at an easel.  And, to the greatest extent possible, I wanted to be able to back-up from the image in order to evaluate it throughout the brushwork.  I did not, for example, want to paint with the abutting panels arranged on a table beside me or on the floor (my knees would have strenuously objected to that idea).

I had already designed an image with the objective of minimizing not only the impact of the two seams upon the viewer, but their potential impact upon execution of the image.  Scaffolding was, of course, an option, but an option that still left me with the question of where to mount 154.75 in. of paneling while I painted across the lower of the two seams.  Depending upon the mounting and given my personal requirements for interacting with the work, either the work would have to move up and down in front of me, or I would have to move.

That was the point at which the banister along the edge of the loft above the studio--a banister whose style had never really suited us--was doomed.  I should also mention that these considerations made it evident that painting the twelve panels constituting the 69.9 square feet of this particular project presented a drying conundrum at least as great as the easel puzzle.  As I envisioned the framework of an easel-wall across the end of the studio loft, it became clear that such an easel would serve as a drying rack as well.

These photographs tell the rest of the story.  The first photo shows the installed panel-easel sub-assembly, with the banister still in place. 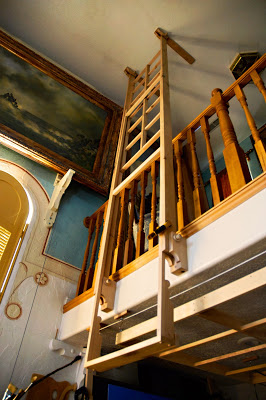 The vertical sides of this sub-assembly are 1x4s secured to the ceiling and to the side of the loft by wooden brackets in which a common 16d nail serves as the pin through the 1x4, securing it in place.  The knobs on each side of the bracket are primarily cosmetic, but help keep the pin in place. 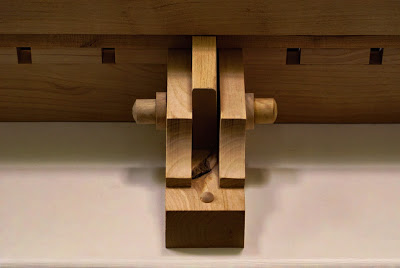 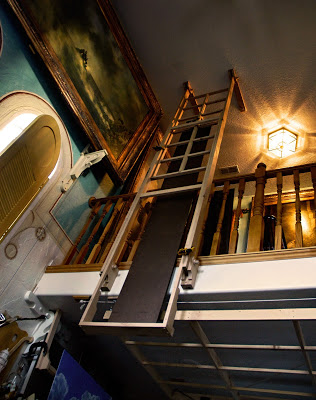 Below, the floor-to-ceiling easel appears from the loft-side of the structure.  At banister-height, the horizontal members are secured to the vertical ribs to serve as a railing.  Bar clamps below this railing stand-in temporarily for balusters.  The other horizontal cross-pieces are held in place only by clamps, and provide cross members to which painting panels can be clamped.  One of the paintings is already under way on the painting-panel sub-assembly. 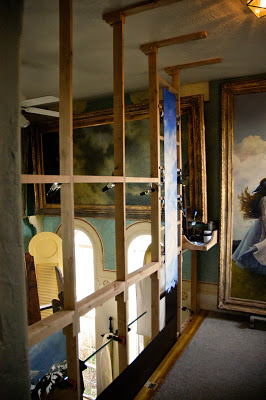 In the next photo, two panels of on the tetraptych images are in progress on the painting-panel sub-assembly. The seam between the top panel and the middle panel is just above the bottom of the inside bottom edge of the framed painting on the wall in the background of the photograph. 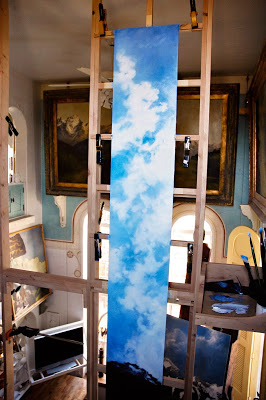 Below, three of the middle panels (in the 3-panel sets that constitute the four images in the tetraptych) are drying on the easel while I work on the top and middle panels of the fourth image-set. 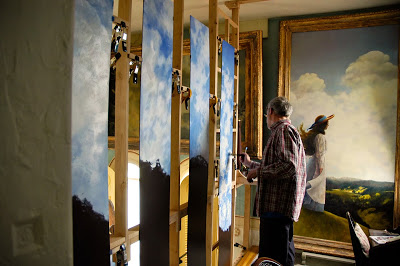 The next photograph shows the palette shelf built into the easel near the painting-panel sub-assembly.  The shelf is provided with deep sides, except at the front corner, to help prevent something spilling or tumbling either to the floor of the loft or the floor of the studio below.  The paino-leg brush holder appears on the shelf. 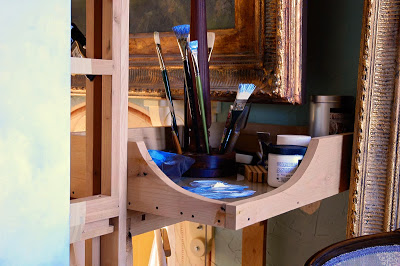 Panels are secured to the easel by clamp extensions.