We use a natural-light flood in each of the three track-mounted fixtures.  This significantly extends painting time during the winter, as well as on days when meeting a deadline just doesn't fit the sun's schedule, even during mid-summer.  Of course, being able to rely solely on the floods during a painting session depends on what is being painted, but that's a subject for another post.  This post focuses only with what we finally did in order to shield the artist from the glare of floods trained directly on the easel.

A hat seemed the simplest solution, but I don't like hats.  Instead, we experimented with a scrim and an old flood-stand.  This photograph shows the stand-mounted scrim, stabilized by sandbags and placed on a table so the scrim is between the artist and the floods.  The edge of the scrim shades the artist, but allows light from the floods to fall directly and obliquely on the painting. 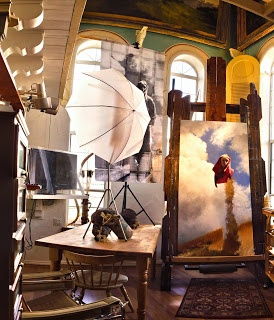 When this use of the scrim proved successful, we created the more permanent mounting shown in the following overhead view.  In the photo, the floods are off to the right side of the image, far enough away to prevent a fire.  The simple wooden tower, through which the umbrella shank is mounted, rests and pivots within the circular track around the edge of a wooden platform mounted to the arm of a 1x3 that disappears beyond the edge of the photo, where it is clamped to the side of wall-mounted shelves. 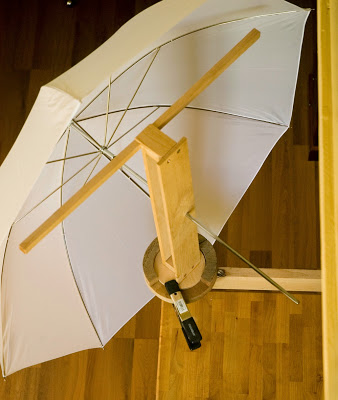 The half-inch-square piece of wood atop the tower is left-over from experimentation with a small panel of fabric used as a scrim.  It serves no purpose in terms of the umbrella scrim, but we kept it in case some unforeseen use of the mount requires it.

The umbrella scrim not only protects the artist from glare, but studio visitors as well.