COVID-19 info for October 2021: We're still open online! We continue to make minor adjustments to order fulfillment to accommodate local health regulations and resolve occasional supply chain issues. We now accept PayPal, major credit cards and Venmo (via PayPal) for online orders, but we had to permanently discontinue in-store pickups, replacing them with free expedited domestic shipping on most products. Orders are fulfilled on schedule by us or directly through our manufacturing partners, but some delays could be possible as the holiday season begins. 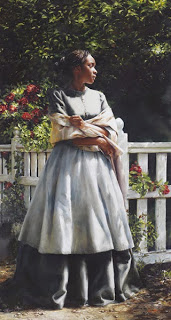 Till We Meeting Again, an original oil painting by Elspeth Young, received an Award of Merit at the 90th Annual Spring Salon hosted by the Springville Museum of Art, Springville, Utah.
The juried exhibit (April 24 – July 6, 2014) is open only to Utah artists.
Of 860 entries submitted, 216 were juried-in to the show, and 20 of the works selected also received awards.

"We've noticed," said Rita Wright, director of the Museum, "that, almost without exception, everybody that walks into the gallery, enjoys Legacy (Portrait of Lois Childs) by Casey Childs (the first axial view in the exhibit), and then turns right around, and immediately migrates to the corner to view Till We Meet Again. It just keeps happening over and over. Patrons have a way of picking out what they are interested in seeing—pieces of real value. We've had so much interest and conversation surrounding the piece. It's an exquisite addition to the salon."

Al Young Studios offers a selection of 44 different print sizes of this image at the Studios' exclusive retail outlet for all artworks and publications published by the artists of Al Young Studios.